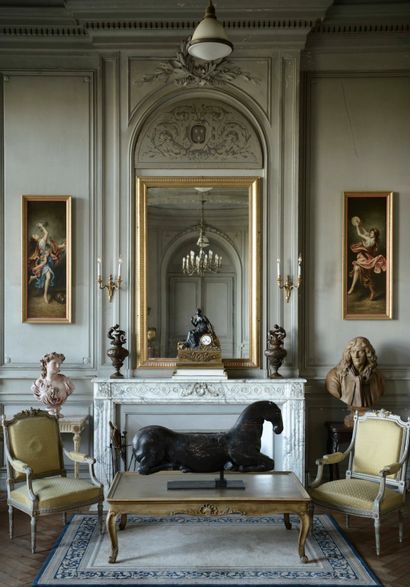 The Château de Marcellus now hosts the collection of architectural antiques and garden ornaments of the antique dealer Samuel Roger.

The castle of Marcellus was built between 1590 and 1775 on the ruins of a first fortress of the 14th century.

In 1581 Henry of Navarre, known as "the Great", future king of France and lord of the Duchy of Albret, gave the fortress to Aymeric de Gasq, lord of La Gasquie and adviser to the Bordeaux parliament.

At the beginning of the 13th century, it became the residence of the family of Martin du Tyrac de Marcellus.

After having worked in Houdan in the Yvelines since 1992, Samuel Roger decided to acquire a historic castle to display his antiques and garden objects. The castle of Marcellus, having kept part of its furniture and art objects, has been enriched with antiques from the collection of Samuel Roger who entered the premises in 2020.

This collection will be dispersed during a public sale on 29 & 30 May under the hammer of Maître Collin du Bocage - Paris Enchères.

columns, mirrors and overmantels, firebacks, andirons, objets d'art and statues, make up the collection that will be offered at this sale.

This is an opportunity for all lovers of heritage, antiques and objets d'art to acquire objects or elements of architecture for the renovation or embellishment of

With your consent, we would like to use cookies placed by us on this site. Some of these cookies are strictly necessary for the smooth running of the site. Others are used to:

Your consent to the installation of non-strictly necessary cookies is free and can be withdrawn or given at any time.

By allowing these cookies, you agree to the deposit, reading and use of tracking technologies necessary for their proper functioning.
Read more about our privacy policy.